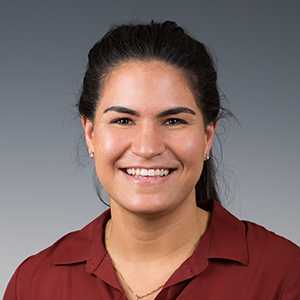 Zahra Finnigan is a Geoscientist at the EERC, where she interfaces with a diverse team of scientists and engineers to assess project uncertainties in oil and gas development and geologic CO2 storage. Her work involves contributing to the development of models of the subsurface and other regional characterization activities in support of EERC projects. She holds a B.S. degree in Geology from the University of North Dakota and an Associate degree in Physical Science from Seminole State College, Seminole, Oklahoma.

Zahra’s principal areas of interest and expertise include geologic modeling and mapping, cartography, and field sampling and collection.

“As an aspiring geoscientist, my vision of success is influenced by the environmental research I can conduct, as well as the work environment that I am surrounded and supported by,” said Zahra. “The EERC’s impact on the state allows me to acquire the knowledge and tools to succeed. Working in a work environment like the EERC means that my dream of solving world energy problems is achievable and within reach.”

Zahra was interested in working at the EERC because of the reputation of ambition and persistence we have. She identifies the same qualities in herself and credits them with the success she’s had throughout her life. Zahra worked at the EERC as a student research assistant for nearly 2 years. She helped with several projects, including CarbonSAFE and the rare-earth elements project. She said the exposure to such broad areas of work allowed her to better establish her professional path.

Zahra grew up in Zimbabwe. She said her childhood had a deep impact on her goals and is the reason she feels so strongly about making a difference and being part of innovative research that advances future energy opportunities around the world. Zahra also had the goal of playing American college sports and was recruited from Zimbabwe to play for the University of North Dakota women’s tennis team. She played her full eligibility and is now a volunteer assistant coach for the team.